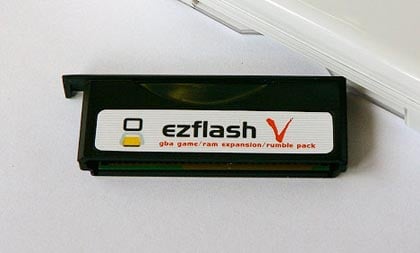 The 3 in 1 Expansion Pack is a NDS Slot-2 Cart that works in conjunction with NDS Slot-1 Carts. The device attempts to integrate three distinct solutions. First, the device is capable of loading GBA games stored in slot-1 devices in a manner similar to previous slot-2 solutions created by the EZ-flash team. Secondly, the 3 in 1 is a memory expansion pack. Finally, the device is a competing rumble pak expansion for games that support official DS rumble pack.

The EZ-Flash V software was developed in-house and is capable of seamless integration of all the hardware features of the 3 in 1 Expansion Pack. The EZ-Flash team does not ensure hardware compatibility with other slot-1 devices, but they have never discouraged access to their hardware. The source code necessary to utilize the key features of the expansion pack is readily available to developers. There have already been many successful solutions for third-party slot-1 carts.

Furthermore, homebrew software can utilize the 3 in 1 for rumble and/or increase available RAM.

Excerpt, regarding Expansion Pack: "The build quality is great, it feels very sturdy and the black brushed finish was a good choice. The cart is held together with a single screw on the back. It fits firmly in the GBA slot however it does seem to stick out ever so slightly, so slight it’s hardly worth mentioning. You’ll notice it if you brush your finger over it though."