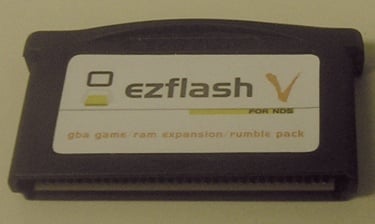 The 3 in 1 Expansion Pack is a NDS Slot-2 Cart that works in conjunction with NDS Slot-1 Carts. The device officially attempts to integrate three distinct solutions. First, the device is capable of loading GBA games stored in slot-1 devices in a manner similar to previous slot-2 solutions created by the EZ-flash team. Secondly, the 3 in 1 is a memory expansion pack. Finally, the device is a competing rumble pak expansion for games that support official DS rumble pack. Furthermore, open third-party access to the hardware features have expanded the capability of the Expansion Pack.

The source code necessary to utilize the key hardware features of the expansion pack is readily available to developers. There have already been many successful solutions for third-party slot-1 carts. Currently, the most popular homebrew software utilize the hardware features for their officially intended uses. Additionally, due to the relatively unspecialized nature of the hardware, many creative uses have already started by homebrew developers.

The 3 in 1 is compatible with GBA ROMs properly patched. Optional ROM trimming is also available. GBA ROMs can be written to the PSRAM unless the ROM is larger than the 128 Mbit capacity and/or has a save type of 1 Mbit or larger. All GBA ROMs can be written into the 256 Mbit NOR flash memory. The NDS Browser requires additional patching and/or tools for unofficial slot-1 carts in order to recognize the PSRAM. The rumble feature is currently only available for NDS games, but can be easily coded into homebrew.

Homebrew applications like DSLinux-DLDI can use the Expansion Pack as a memory expansion.

Overall: "The build quality is great, it feels very sturdy and the black brushed finish was a good choice. The cart is held together with a single screw on the back. It fits firmly in the GBA slot however it does seem to stick out ever so slightly, so slight it’s hardly worth mentioning. You’ll notice it if you brush your finger over it though."

GBA: "You can start a GBA game by either hitting the ‘Start GBA game’ button on the DS firmware menu or by pressing R+A when selecting the game in the EZ-V menu. There is no EZ-V GBA loader menu meaning that you can only have one game on the cart at one time. It would be nice if in the future you were allowed to write multiple games to the 256mbit of space. But as it stands it's a simple and effective GBA solution for a slot-1 flash card. The EZTeam come highly recommended with all their GBA ventures and the Expansion Pack is no exception, GBA games run fine and are easy to write and use."

RAM: "When the Opera DS Browser was released it came with a separate RAM pack which gave the DS that little extra boost to run the application. The Expansion Pack simulates this RAM pack when you use the DS Browser ROM. There is no patching required, just simple drag & drop and the Opera Browser will work fine. Strangely though the Expansion Pack will not work if you use the original DS Browser DS card with it, only the ROM version will work. That being the case there shouldn’t be many people out there that would want to use the original card with the Expansion Pack if they have an EZ-V."

Rumble: "Rumble is loud, very loud. On full rumble the Expansion Pack is frighteningly loud and completely distracts from the gaming experience. This is in line with the official rumble pack. However you have the ability to select between three different strengths of rumble. Pressing R+L on the EZ-V loader will take you to the menu where you can select between low, medium or high. On low the rumble emits hardly any noise and still has a pleasant sensation when playing games like Elite Beat Agents. Games do not have to be patched for rumble support, that information is stored in the updated savelist file. Only official rumble supported games will use the Expansion Pack as it works just like the official pack."

The following are basic instructions on how to use the Expansion Pack. The open source nature of the 3 in 1 provides users many alternative methods.

The EZ-Flash V can open a clean Nintendo DS Browswer ROM without any additional setup. Other Slot-1 Carts will require a third-party solution in order for the ROM to recognize the 3 in 1 PSRAM.

According to the Quickstart Guide and Official GBAtemp review, an updated save list is necessary in order to identify NDS ROMs that support rumble when used in conjunction with the EZ-Flash V. Other Slot-1 Carts will require a third-party solution. Rumble is compatible with any game that supports it.

Where do I put my ROMs?

Unlike alot of Slot 2 solutions out there, the 3 in 1 does not have its own removable storage. This is due to the fact that it was initially designed for use with the EZ-Flash V. ROMs are stored on the removable media or internal storage of your Slot 1 device. Where they are put is determined by which solution you choose from the third-party solutions list.

The 3 in 1 can only hold one ROM in its PSRAM. Any time you want to play a game 16MB or less, you flash it over to the PSRAM on the cartridge using your loader of choice. This is standard with all slot 2 cartridges. Most slot 2s that have firmware (the ones with removable or internal storage have the loader built-in). The only reason people think otherwise is because most Slot 2s have either removable or internal storage for ROMs, homebrew, etc, which the 3 in 1 does not. Please read the initial setup section, it will explain everything perfectly.

Whenever I load up a game, my save is gone! What do I do?

First off, make sure you are SRAM patching your games using one of the two tools listed in the initial setup section. If you are already doing this, make sure you are loading games in either PSRAM or NOR, not both. From what I have seen, most loaders want you to use one or the other for it to work correctly. Check the help files of your loader for more information.

When do I need to patch a GBA ROM in regards to the saving function?

Check to see if the ROM you are trying to patch isn't already using SRAM. Anything already using up to 512kbit (64KiB) SRAM to begin with shouldn't need to be patched at all. GBA games that originally used EEPROM or FLASH, and/or has over 512Kbit, will need to be patched. It has been suggested that 1024Kbit save types have to be patched with EZ4 client since GBATA has not implemented the concept of SRAM bankswitching. GBATA, for example, will not allow the file to be patched if unnecessary.