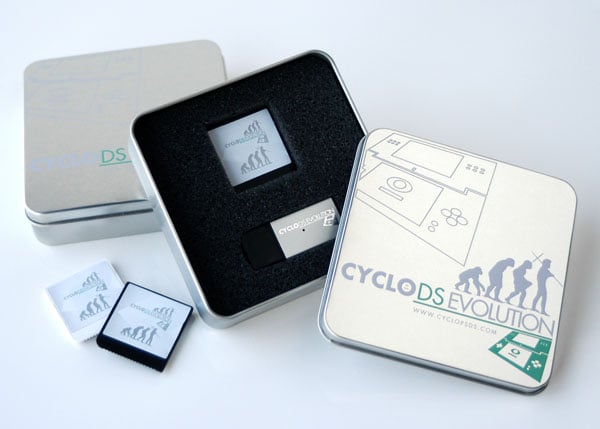 The CycloDS Evolution is currently available in white and black. There are three versions (V1, V2 and V3) and two hardware revisions. V1 and V2 cards are running on HW v1, V3 is running on HW v1.1. HW v1.1 is slimmer and doesn't have the protruding chip through the sticker which makes the card fit easier. The only difference in functionality is the way to get into recovery mode (to force flashing of the firmware when something went wrong while trying to flash firmware the normal way). HW v1 is forced into recovery mode by pressing the SELECT button before starting the CycloDS whereas HW v1.1 needs DOWN and B buttons.

The CycloDS Evolution is TeamCyclops' first slot-1 solution. It boasted several never before seen features like full download play, SDHC card support, and an in-game menu. Now, several card manufactures have followed in their footsteps by releasing their own SDHC compatible cards and adding full download play support. The team has listened to user bug reports and feature requests to make it one of the most feature-rich, and best cards out there.

- "GBA Support! in combination with an EZ-Flash 3-in-1 you can load GBA roms directly from the Cyclo DS"

Excerpt: "I'd definitely recommend the cart to anyone seeking a slot-1 flash kit, but if you're already content with your current slot-1 solution, unless you're really interested in one of the above features, you should perhaps think twice before considering migrating. But if you're in the market for a feature rich slot-1 solution, I'd suggest you consider the CycloDS Evolution."