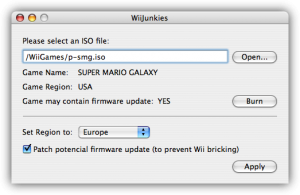 WiiJunkies is an unscrambling / RegionFrii / WiiBrickBlocker combination written for Mac OS X. It runs on Mac OS 10.4 and 10.5 on both PPC and Intel based systems.

Its goal is to unscramble, free, patch and burn isos using a single application.